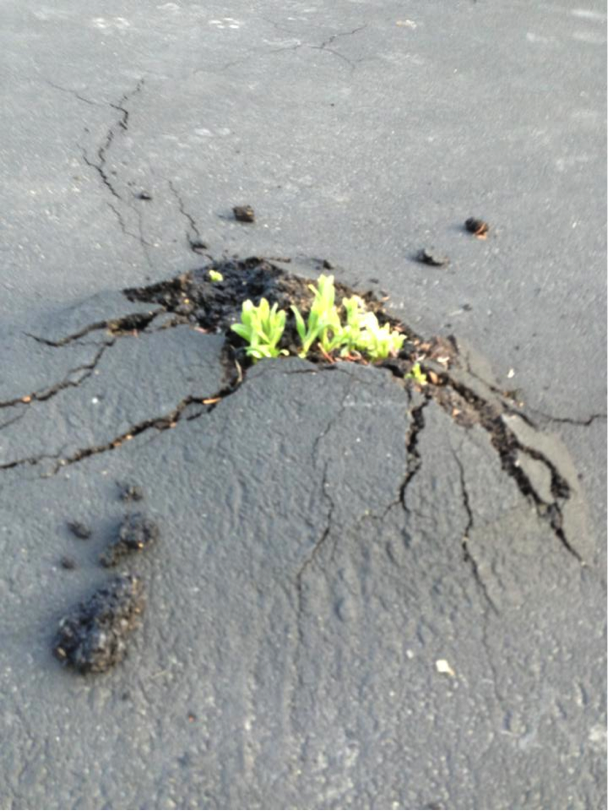 ”Growing as a flower in the Twin Cities is a hard job.  As if the winter isn’t tough enough on us as it is!  There’s all the effort of thawing out, poking through any cracks possible with soft enough soil to finally get some sunshine, then BAM!  Run over again.”

This could be taken as a life-philosophy in general, but we’re talking about the tulips popping up in your driveway.  There are many purposes for a driveway as we have defined here in the past.

To be a garden patch is not one of them.

It’s the strangest phenomenon, though, right?  One could swear that after the snow melts, sometimes damaged pavement magically appears in springtime – in places that it didn’t have any apparent problems just months ago while it was tulip-bulb-planting-and-leaf-raking season.

As the frost finally has left the ground after the long Minnesota winter, heaving that resulted from the freezing/thawing of soil moisture under paved areas many times results in uneven pavement settling, cracks or evil pot holes.

As one of the leading pavement experts in the Twin Cities, we at Richfield Blacktop and Concrete get called about these unfortunate circumstances every spring and early summer.  Sometimes the reason for driveway, sidewalk, concrete steps or patio damage is obvious.  At other times, we get to be Sherlock Holmes-like mystery-solving sleuths to figure out what’s up.

Common problems resulting in damage that “magically appears” one day have usually been manifesting for some time and were hidden threats.  Pavement problems could be a result of:

This list is not complete and the culprits are often not easily detectible visually.

None of these problems are insurmountable, although over time, like the plants growing in your driveway or sidewalk, the long term effects don’t fall into the “property enhancement” category.

The important thing is to not to put “lipstick on a pig”, so to speak.  It’s best to find and fix the origination of the problem.  The last thing you want to do is get a brand spankin’ new driveway and have plants seeking to poke though the surface to catch a few rays a few springs from now.

Mother Nature is on her own agenda and waits for no one – especially with our short Minnesota growing season.  It’s time to get to outdoors and inspect what “surprises” that may have happened with the freeze/thaw on your property.  We can help you with driveway, sidewalk or patio repairs or replacements.  Then head over to the garden center for your summer plants and bulbs – the ones that will be grateful to be growing in a place they won’t be run over.