There’s an old saying among concrete workers: “There are two kinds of concrete: concrete that has cracked, and concrete that will crack.” The truth is that every concrete slab will crack at some point in time. It’s the nature of concrete. However, a properly designed and installed concrete slab will crack in a controlled way that makes those cracks almost invisible to the casual observer. At Richfield Concrete, we design and install concrete driveways, sidewalks, steps, patios and garage floors using the very best practices to minimize pavement cracking. Here we provide the information that will help you understand why concrete pavements crack and how to prevent it. 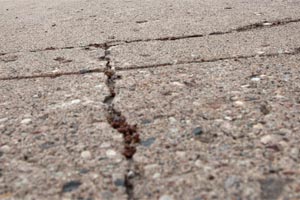 Concrete is made up of an aggregate of sand and gravel, held together with cement. Placed in forms as a semi-liquid material, it cures over time to become a hard, stone-like material. Concrete is very strong under compression loads. What that means is that a typical concrete slab on a well-compacted base will resist more than a two-ton load per square inch resting on it without any damage. Concrete also resists surface damage, due to its hard surface.

On the other hand, concrete has much less strength in tension. That means that forces that tend to pull it apart or bend it can easily cause the bond between the cement and the aggregate to break, creating a crack. The cement that binds the aggregate is relatively brittle. Some of the tension and bending forces that can crack concrete include:

There are a number of ways that a concrete contractor can help to control cracking. Most of these have to do with the original installation of the concrete. Some of these crack control method include:

Minimizing the effects of the cracking that is inevitable in all concrete begins with the design and construction process of every concrete project. At Richfield Concrete, our long experience and knowledge of soil and weather conditions in Minnesota gives us an edge on designing and installing concrete projects that will resist cracking. In your free, no-obligation consultation with a Richfield Concrete representative, you’ll learn how options you select for your project will work with our expert installation to keep your concrete project looking great for many years to come.