Why Concrete Reinforcement Is Important?

Concrete is one of most frequently used building materials there is. The reason is that it is easily placed, due to its fluid condition and it’s stone-like hardness once it has cured. Concrete is also very strong and can support large amounts of weight on its surface without deforming or crumbling. Those features of concrete make it especially popular for creating large flat surfaces, like driveways, roads, patios, and sidewalks.

Despite that hardness and strength, however, concrete is weak when pulled or bent. It has relatively low tensile strength on its own. Pulling forces on concrete occur when soil moves under a slab and in expansion and contraction due to temperature changes in Minnesota. Why it has low tensile strength is pretty easy to understand, if you think about what concrete is. A mixture of cement, gravel, and sand, concrete doesn’t have structure that extends far in any direction. The cement that holds all that gravel and sand is rather brittle. When stresses that tend to pull the concrete apart or bend it occur, the cement can break. The result is a crack in the concrete. 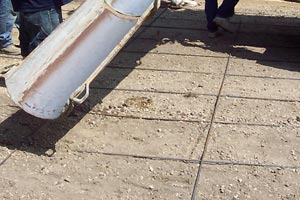 For Richfield Concrete, helping homeowners understand concrete and its properties is all part of our dedication to customer service. We believe that the more our customers know, the better able they’ll be to make the right decisions for their projects. Unlike some paving contractors, who present customers with a one-size-fits-all solution for their concrete project, we’ll offer all available options to you, explain the pros and cons of each option, and then let you make the decisions for yourself. Contact Richfield Concrete soon for a free, no-obligation consultation and estimate on your concrete project.